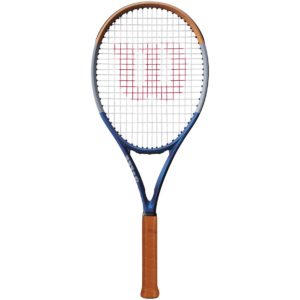 The Clash 100 is designed to take advantage of the more vertical swing of the modern game. The Clash 100 bends in a specific way, which creates a deeper ball pocket and enhances the overall feel of the frame – while still providing excellent stability. The revolution is here. Wilson introduces a new series of racquets known as Clash! This version is the Roland Garros 2020 edition. The Clash gets its name by combining usually opposite traits of (power + control) + (flexibility + stability) all within the same frame.

The Clash 100 is designed to take advantage of the more vertical swing of the modern game. The Clash 100 bends in a specific way, which creates a deeper ball pocket and enhances the overall feel of the frame – while still providing excellent stability.

Wilson has added all-new technology into the Clash, starting with the introduction of “Free Flex.” Powered by a proprietary carbon mapping, the Clash bends in all-new dimensions so players can swing freely with more confidence. Wilson also developed the Clash with a unique frame geometry known as “Stable Smart” – designed through digital simulation, providing best-in-class stability and power, making the Clash one of the most flexible frames in tennis.

With a 100 square inch head size, a solid 11 ounce strung weight, and an open 16×19 string pattern, the Clash 100 is a great feeling racquet for a wide variety of player types looking for a mixture of power, control, and spin.

Wilson is a major manufacturer of tennis rackets. The original kevlar Pro Staff model racket, known for its use by Pete Sampras, was heavy (more than 350g strung) and small-headed (85 sq. in.); Roger Federer also used the same racket model. As of 2015, he uses the Pro Staff RF97 Autograph model that is heavy (340 g/12 oz unstrung) and larger (97 sq. in.). Jim Courier and Stefan Edberg also used the Pro Staff Original, Edberg later switching to the Pro Staff Classic in 1991, which was the same racket (85 sq. in. with slightly rounded frame edges) but with different paint work. In late 2009, Wilson unveiled their latest line of rackets, codenamed 20x, which they would later rename BLX. This line directly replaces their previous K-Factor series with all new technologies. Also, many pros use custom-made rackets that perform differently from the mass-produced versions. Aside from tennis rackets, the Wilson sporting goods company also makes tennis balls (including the official balls of the US Open and starting in 2020, the French Open major championships), shoes, balls, strings, clothes, and racquet bags.